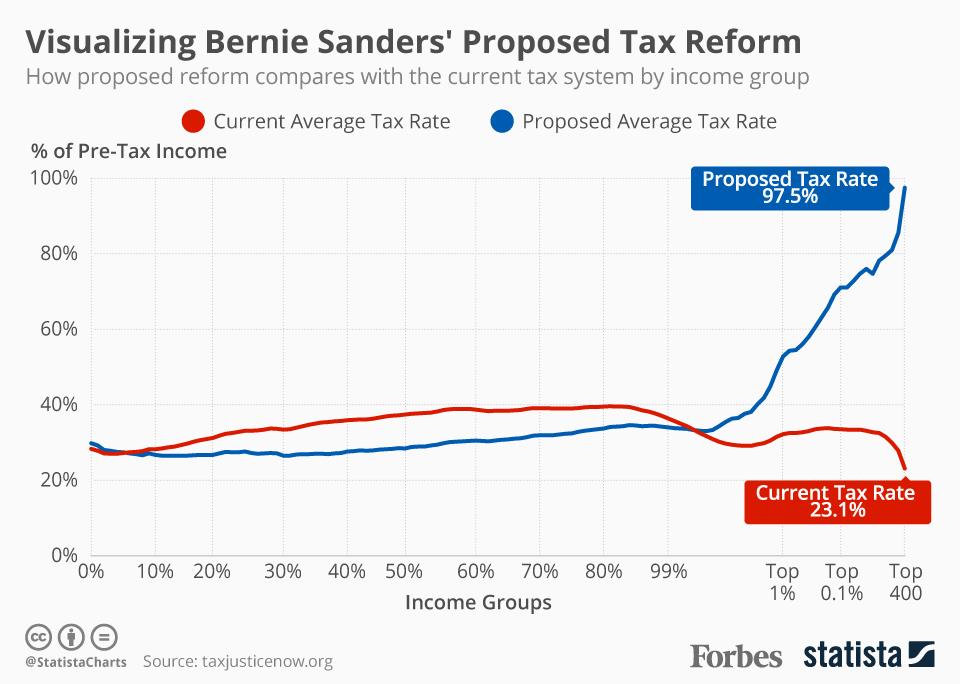 A Bernie Sanders presidency could be very bad news for U.S. billionaires. While Elizabeth Warren would levy taxes of up to 62% on America’s wealthiest individuals, Sanders would go a step further according to professors Emmanuel Saez and Gabriel Zucman from the University of California, Berkeley. The two economists have developed a new interactive website which shows presidential candidates’ tax plans by income group.

Notably, Sanders would tax the vast majority of income groups at a lower rate than the current tax system. Things really start to get interesting when it comes to the top 1% of earners, however, where the tax rate spikes to 53%. It doesn’t stop there and the country’s 400 wealthiest individuals would have to pay a whopping 97.5% tax – the current rate under the Trump administration is just 23.1%. If the proposal was in place, Jeff Bezos and Bill Gates would pay approximately $9 billion and $8.5 in taxes this year respectively.

Both Sanders and Warren have made wealth taxes core aspects of their campaigns and such taxes have proven historically popular with voters. Between 2013 and 2018, Gallup polling has found that more than 60% of the U.S. public consistently agreed that upper-income people pay too little in federal taxes each year. Sanders tweeted that “billionaires should not exist”, justifying his proposals by stating that 500,000 Americans are homeless, 87 million are uninsured or underinsured and 45 million have student debt, all while three people own more wealth than the bottom half.

People & firms on the move: BSSF marketing director named to local 2020 Women of Influence list
If you miss travel, road trips could be your key to safer summer getaways
Unemployment is falling. But it may be short-lived: ‘There’s no cause for celebration’
How High are Beer Taxes in Your State?
Illuminating Independence Day Taxes