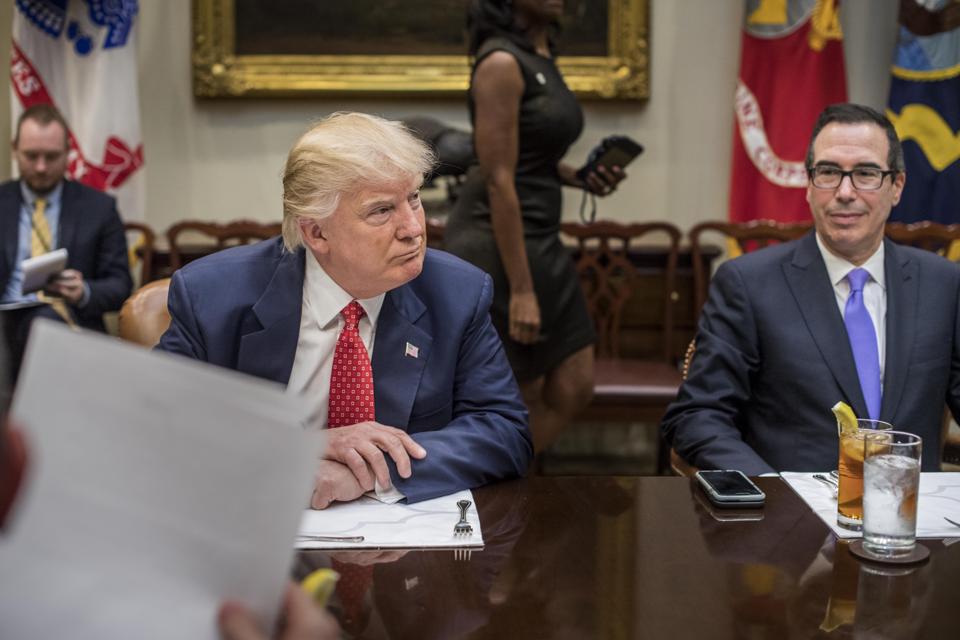 After signing nearly $5 trillion of new debt into law since taking office, President Trump’s Fiscal Year 2021 budget proposal provides the clearest look yet at how he intends to govern if re-elected in November. The ironically titled “Budget for America’s Future” is anything but: it proposes to slash critical public investments that lay the foundation for long-term growth, double down on reckless tax cuts for the rich, undermine health-care and safety-net programs for millions of Americans, and leave the nation on a path of trillion-dollar deficits as far as the eye can see.

The Trump administration claims its proposals would put the federal budget on a path to balance by 2035, but this relies upon economic assumptions that are downright absurd. The Office of Management and Budget projects real gross domestic product will grow more than a full percentage point faster than does the non-partisan Congressional Budget Office every single year between 2020 and the end of the projection period. That annual difference may not sound like a lot, but it adds up: the Trump administration’s fiscal estimates depend on the U.S. economy producing nearly $25 trillion more in output over the next decade than CBO projected in its most recent budget and economic outlook.

These outlandish economic growth projections enable the Trump administration to claim that it will raise $3.1 trillion more in revenue over the next decade relative to CBO’s baseline, when in reality the administration is proposing tax cuts that would actually reduce revenue. Trump proposes to extend the individual income tax cuts created by the GOP’s 2017 tax law past their scheduled expiration in 2025. But interestingly, even as Trump proposes to extend tax cuts for wealthy individuals, his budget would not extend the few expiring business provisions that some economists believe could potentially increase domestic business investment. This omission is further evidence that Trump is underestimating the cost of his policies while overestimating the boost they would give to economic growth.

Although Trump’s phony deficit reduction is bad, his real proposals for deficit reduction are even worse. Trump achieves over half of his policy savings from proposing deep cuts to domestic discretionary spending. By 2030, this category of the federal budget – which includes every dollar appropriated by Congress annually for non-defense purposes – would be slashed in half to unprecedently low levels.

These cuts are particularly harmful because domestic discretionary spending is the primary mechanism for funding critical public investments in infrastructure, education, and scientific research that lay the foundation for long-term economic growth. Although Trump’s budget pays lip service to investments in infrastructure and certain kinds of research, his deep cuts to domestic discretionary spending would dwarf targeted initiatives in those areas that receive modest funding support. Trump also proposes nearly $1 trillion in cuts to Medicaid and the Affordable Care Act, and over $200 billion in cuts to other low-income support programs that together would undermine economic security for millions of Americans.

It’s unlikely that many of these policies become law before the next election. After all, it was just last year that Trump signed a $1.9 trillion budget deal passed by Congress that significantly increased spending on the programs he now proposes to cut. But they stand in stark contrast to the policies being championed by his Democratic opponents, all of whom have proposed to reverse the decline of federal public investment spending rather than worsen it. Mayor Pete Buttigieg has gone the furthest in taking Trump to task, lambasting his administration’s trillion-dollar deficits while offering a complete plan for offsetting the entirety of his proposed spending increases. Whether Democrats choose to nominate Buttigieg or another candidate for president, they should follow his lead in holding Trump accountable for his busted election-year budget and offering voters a real budget for America’s future.

IRS says it will not extend tax filing deadline beyond July 15
People & firms on the move: EisnerAmper appoints Pennsylvania forensics leader
FASB and GASB undergo leadership transitions amid coronavirus
GAO Report Reveals Need to Simplify Next Round of Rebates
These 4 numbers show the dramatic racial economic inequality in the U.S.