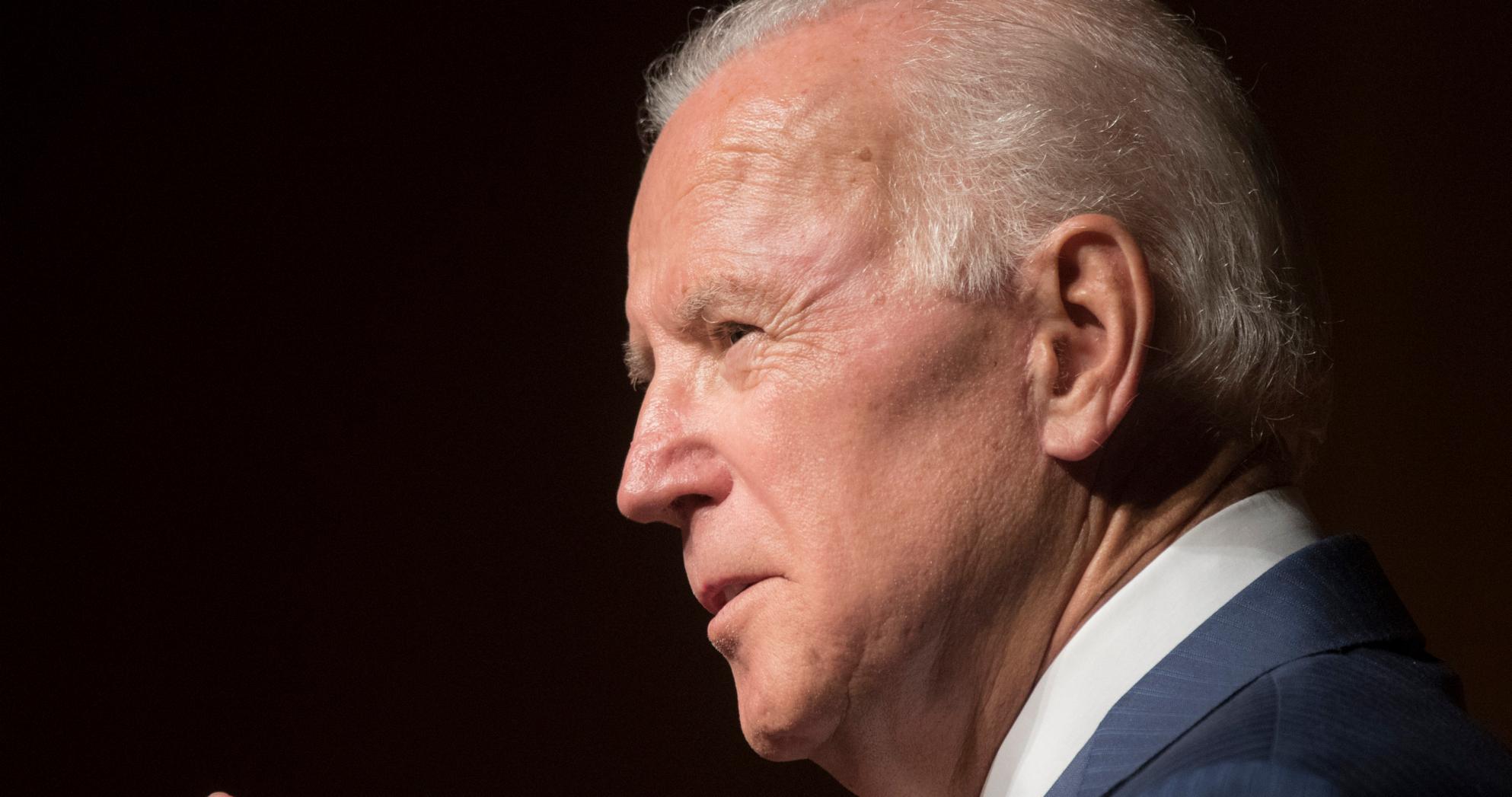 Supporters and critics of Democratic presidential nominee Joe Biden’s tax plan have made a variety of claims about the size of the tax proposals, ranging from “not big enough” to the “biggest tax increase in history.” Comparing his tax proposals—which include higher taxes on high-income earners and businesses paired with more generous provisions for households and specific activities—to historical tax changes is helpful for analyzing these claims.

This context shows that while Biden’s proposal would not result in the largest tax increase on record, it would be large by historical standards and would have a negative effect on long-run output.

We estimate that on a conventional basis, Biden’s tax plan would increase federal revenue by $301 billion in 2021, and by a total of nearly $3.6 trillion from 2021 to 2030 (after adjusting for decreased revenue collections projected by the Congressional Budget Office (CBO) due to the coronavirus pandemic). Stated as a percentage of gross domestic product (GDP), this would amount to an increase in federal revenue by 1.44 percent of GDP for 2021, and a 1.39 percent increase over the 10 years from 2021 to 2030 (see note in Table 1).

According to a report from the Treasury Department, between 1940 and 2012, Congress enacted 21 major tax bills that increased federal tax revenues over at least one fiscal year. Of these 21 revenue-raising tax bills, the five largest tax increases since 1940 have raised annual federal revenue in the range of 1.33 percent of GDP up to 5.04 percent of GDP.

When examining Biden’s tax plan over a longer period, it would remain a large tax increase by historical standards. Take, for example, the four-year average revenue effect of tax increases since 1968: Biden’s tax plan would raise revenue by about 1.56 percent of GDP from 2021 to 2024, higher than the largest four-year tax increase in that period. The Tax Equity and Fiscal Responsibility Act of 1982 raised revenue by about 0.98 percent of GDP over four years.

If we consider Biden’s proposal over the entire budget window (2021 to 2030) as a percentage of GDP—1.39 percent—it would rank as the fifth largest tax increase since the 1940s. It is also worth noting that many of the tax increases historically were temporary, while Biden’s tax plan would raise taxes for each year over the budget window and are intended as permanent tax changes.

Another way to look at Biden’s tax plan is to examine how much federal revenue as a portion of economic output would be collected if the plan were enacted in comparison to historical revenue collection and the CBO’s revenue baseline. 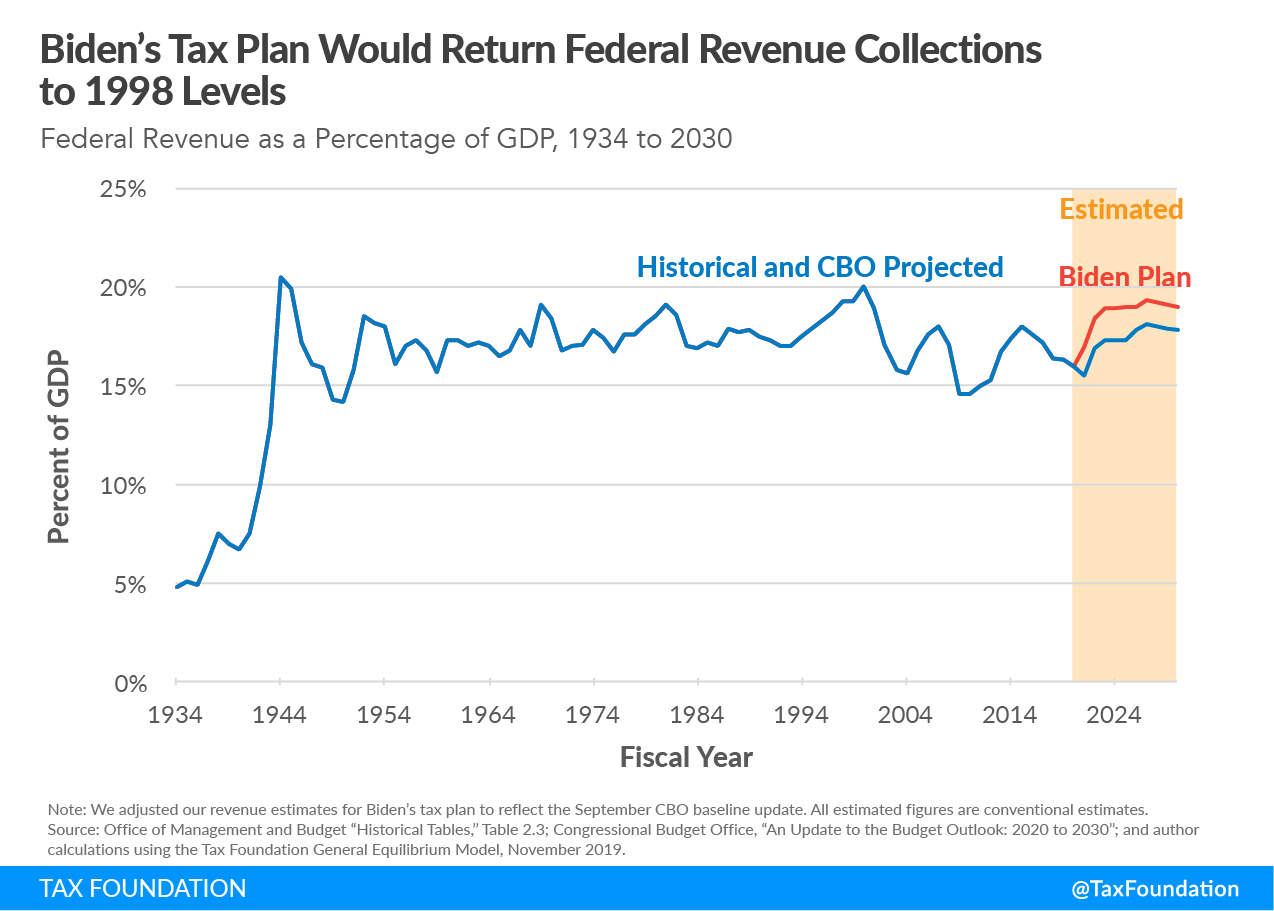 The Biden proposal would raise federal revenue as a portion of GDP from a baseline of 17.8 percent under current law in 2030 to about 18.9 percent, peaking in 2027 at about 19.3 percent of GDP (compared to 18.1 percent as projected by the CBO under current law).

This would bring the United States back up to a high point of revenue collection levels seen in 1998 to 2000, when the federal government collected about 19.3 percent of GDP in revenue for 1998 and 1999 and peaked at 20 percent in 2000 before falling to about 15.6 percent in 2004. For historical comparison, federal revenue collections as a portion of output hit their highest point during World War II, when revenue peaked at 20.5 percent of GDP in 1944.

We have also estimated that Biden’s tax plan would have a negative effect on the U.S. economy, reducing long-run GDP by 1.51 percent, lowering wages by 0.98 percent, and eliminating 585,000 full-time equivalent jobs.

By historical standards, the tax increases Biden has proposed are significant, ranking alongside tax increases used to help finance World War II, the Korean War, and the Vietnam War. While not the largest tax increase on record, Biden’s proposal would raise significant revenue. The plan would also have a negative long-run effect on the American economy, lowering long-run output and after-tax incomes across the income spectrum.

Retirees might want to rethink their reliance on Treasurys for income
Working from home may create home office, nexus issues
CFOs expect corporate tax rates to go up after election
Warren Buffett’s Berkshire Hathaway just made a fast $800 million on Snowflake’s surging IPO
Does Your State Have an Individual Alternative Minimum Tax (AMT)?