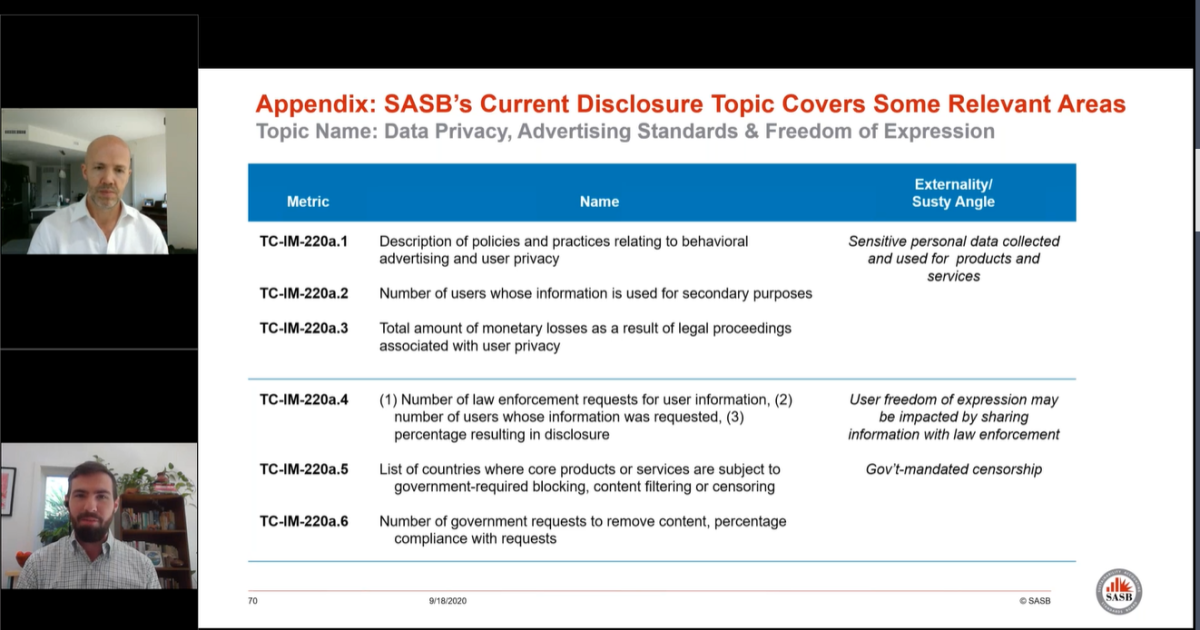 The Sustainability Accounting Standards Board is moving beyond standards for environmental issues and more into the areas of social and governance reporting, with new projects on content governance in the internet media and services industry and human capital management.

SASB held an online board meeting Friday to discuss both issues, along with the more environmentally oriented issue of tailings management in extractive industries such as mining.

The purpose of the content governance project involves evaluating technology companies’ management of user-generated content, advertisements and other third-party content to assess the implications for social capital. SASB is looking at how technology companies are grappling with how to moderate user-generated content, political ads and other third-party content that’s hosted on their platforms. Related issues, such as terrorist content, disinformation and hate speech, aren’t part of SASB’s current standards, though they’re attracting interest from investors. SASB’s staff plans to define what would be considered “content moderation” issues, such as removal of illegal or objectionable user-generated content, review of third-party ads or products, and concerns about the mental health of content reviewers, along with the industries and business activities to which they might apply.

“One of the things that we’ve been thinking about is how business has evolved over time,” said SASB Standards Board chair Jeffrey Hales, during a press conference following the meeting. “That’s something we constantly try to be aware of, both in terms of evolving business models and particular issues that could rise to greater awareness, relevance and interest to investors. In international media and services in particular, but more broadly, there is this issue around content governance, especially in some businesses. Previously, existing standards for media services companies focused on two things: data privacy and also expression in terms of focusing on what happens when governments are requesting that certain things be removed.”

SASB had earlier included this as one area of study at the board, but has mostly concentrated on producing standards related to sustainability. “That is something that we have flagged early on in the professional standards development,” he said. “But since then, there’s been increasing focus around voluntary removal, not at the request of the government, but the company’s own decision about what to do with user-generated content. That’s one of the things that we’re thinking about as well as evolving interest from investors around what happens with targeted advertising and content shaping in terms of where traffic on a website gets directed. The sustainability angle is to think about if users are posting comments and content onto a company’s platform, then there’s the potential for harmful content to be posted. There are freedom of expression issues and privacy as well. We’re trying to improve the standard by taking a broader look at this to also consider from a governance perspective, how are companies thinking about managing those issues?”

As part of this project, SASB is looking at mental health issues for content moderators who might come across violent and graphic sexual content being posted to social media. “There’s a growing and emerging body of evidence that there are mental health risks to conducting content review, looking at all this nasty stuff that’s put on the internet, on the people who are tasked with this difficult work,” said Greg Waters, an analyst and technology and communications sector lead at SASB, during the board meeting. “There’s a balancing act between limiting the amount of harmful content on your platform without unduly limiting users’ freedom of expression. That’s a policy question and an execution question. This is an incredibly difficult activity.”

SASB is also looking at the issue of targeted ads. “Of course, if you’re not monitoring the advertisements on your platform, there is the potential for things like misinformation to be advertised and therefore amplified that way,” Waters added. “It’s really well worn territory about the use and collection of user data in order to deliver targeted ads.”

Like the content governance project, the human capital management project is something of a departure from SASB’s main work up to now, but Hales sees it as fitting into the other kinds of work done by the board on environmental, social and governance, or ESG, issues. While most of the standards so far in SASB’s standards codification have focused on the E in ESG, these two are more in the S and G areas.

“One of the things that we are doing post codification is we heard that there’s a lot of interest in other dimensions of human capital,” said Hales. “There have been efforts from industry groups and regulators, including the SEC recently in the U.S., thinking about human capital and trying to improve human capital disclosure in the 10-K and recognizing a lot of interest in this. We’ve had an ongoing project that has tried to look more completely at the dimensions that relate to human capital and then in developing a framework that will then apply to industry-based plans. We’re not trying to expand in any way our focus, which is on the environmental, social and governance issues that relate to the issues that are material to investors. We’re still doing that, but we’re trying to think about specific business models. What human capital issues give rise to particular issues that need to be managed well in those industries? We often hear every company has employees, so of course, human capital must be material for all companies. But in what way are the issues going to manifest themselves? Is it with respect to health and safety, or does it have to do with labor practices as it does with inclusion, engagement and investing in your workforce? That’s part of what this project is trying to do.”

Among the areas that SASB is planning to research are diversity and mental health in the workforce. SASB staff will be looking at the impacts of diversity, in terms of gender and racial and ethnic diversity, and engagement with various industries to assess the applicability of the issue in an industry-specific context. SASB will also be examining the issue of mental health and health-related benefits in an industry-specific context, while focusing on mental health as an aspect of overall worker health and safety.

The other project discussed at the meeting, on tailings management in extractive industries such as metals, mining and coal operations, is more in line with the kind of work SASB has been carrying out up to now. Tailings are basically the residue left over after extracting coal and metal in mining operations and can be toxic to the environment.

“There’s a lot of interest in tailings management,” said Hales. “Some industry initiatives gathered a lot of investor interest. Given some of the very high-profile failings that created a huge loss of life and economic and environmental consequences, it’s been a focus of our work. We’ve made further progress in the development of specific metrics that would be proposed to improve the standard. One would improve the disclosure of waste management. A second part would try to take the discussion around tailings and really move it particular into the management of those facilities.”

Several catastrophic tailings storage facility failures occurred in 2014 in Canada and in 2015 and 2019 in Brazil. The Investor Mining & Tailings Safety Initiative, formed last year, is developing disclosure metrics with industry cooperation and could be referenced in the SASB standards. SASB hopes to improve the disclosures and especially the metrics around the risks in these facilities in a way that aligns with the industry initiative.

SASB has also been working with other ESG standard-setters to smooth out some of the differences for investors who are confused by the sometimes conflicting sets of sustainability standards. Last week, in response to growing demand from investors and calls from international financial regulators, SASB and the International Integrated Reporting Council, the Global Reporting Initiative, the Carbon Disclosure Project and the Climate Disclosure Standards Board announced that they would work to provide joint market guidance on how their frameworks and standards could be applied in a complementary way, along with a joint vision of how these elements could complement financial GAAP and serve as a starting point for progress toward a more coherent, comprehensive corporate reporting system (see story).

“One of the things that I think about with that statement is that we’re recognizing some confusion in the marketplace around what each of the standards or frameworks is trying to do,” said Hales. “We’re also hearing a call for improved disclosure generally at a global level. And given that there are some important movements going on in the policy world, the European Union seems very likely to consider doing something in this space. It’s really important, especially at this time, to make it clear that these are not competing frameworks, but are actually trying to do very important, but distinct things. We want to show how these different organizations can fit together as sort of building blocks as part of a cohesive system around reporting.”

“I have a lot of respect for the IFRS Foundation,” he said. “I followed their work very closely over the years as an accounting professor, and I think highly of the IASB and the work that they have done in developing International Financial Reporting Standards. I think it’s an interesting proposal. And I think that if the IFRS Foundation were to take on something like what is proposed, I’m sure that they would do it with great care, and it would be a high-quality outcome. But I think the important thing for us is we very clearly believe that there needs to be a focus on the needs of capital market participants to meet the gap between what’s in existing financial statements and the additional material information that is important for capital allocation decisions that relates to the environment, social capital, human capital and the governance over those issues. The biggest thing that I would be concerned about as a representative from SASB is as long as an effort is going to try to continue to meet that need, then that’s something that we can very much be supportive of. We would hope that the work that we are doing would be seen as one opportunity for a building block there.”

Now, with wildfires burning out of control in western states like California, Oregon and Washington State, and Hurricane Sally wreaking a path of destruction this week in Gulf states like Florida, Alabama and Louisiana, awareness of climate change has been growing as smoke from the fires out west drifts as far east as Washington, D.C. to dim the skies around the U.S. Capitol and White House. Perhaps that will eventually convince climate change skeptics in the nation’s capital that the time to act to stem the crisis is shorter than ever.

“I want to believe that people will be the most swayed by the most credible evidence that they can get,” said Hales. “I’m a big believer in the quality of science, but I’m also a pragmatist. And I recognize that sometimes a very vivid display or anecdote can be incredibly persuasive. I would hope at a minimum, it would help them turn to look at the science if they haven’t already and consider the independence and the massive amount of evidence that there is around these issues and the importance of considering them.”