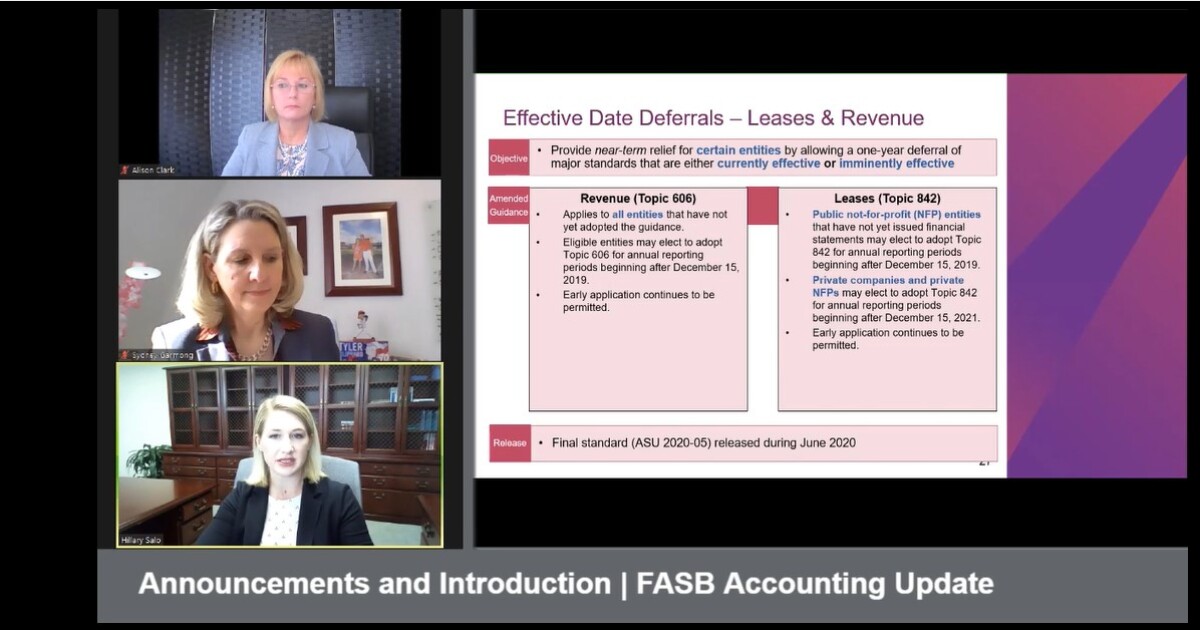 For lessors, the proposed changes would amend the classification requirements for leases in which the lease payments are mostly variable by requiring lessors to classify and account for those leases as operating leases. In doing so, FASB said the risk of lessors recognizing losses at the start of the lease for sales-type leases that are expected to be profitable would be mitigated by the improvements in the standard. FASB believes the resulting financial reporting would more faithfully represent the underlying economics of the lease.

For lessees, the amendments would offer the option to remeasure lease liabilities for changes in a reference index or a rate affecting future lease payments at the date those changes take effect. This option would be available as an entity-wide accounting policy election.

Finally, for both lessees and lessors, the third improvement would change the requirements when there is an early termination of some leases within a contract that doesn’t economically affect the remaining leases in that contract. Under those circumstances, businesses would be exempt from applying modification accounting to the remaining leases.

“The proposed ASU represents our commitment to take timely action based on what we learn during our comprehensive post-implementation review (PIR) process of major standards,” said FASB chair Richard R. Jones in a statement Tuesday. “In this case, it would address three areas brought to our attention by public company stakeholders from their experiences applying the leases standard.”

The proposed accounting standards update, along with information on how to provide comments, is available atwww.fasb.orgalong with other guidance on the leases standard. FASB is asking for comments on the proposed changes by Dec. 4, 2020.

“We encourage all stakeholders to review and provide feedback on the proposed ASU and whether they think the proposed changes would improve the guidance for all companies and organizations implementing it,” Jones added.

FASB has been making several adjustments in its lease accounting standard, including pushing back the effective date for private companies and nonprofits in response to the novel coronavirus pandemic. “We’re really more than ever focused on understanding the views of our stakeholders and listening to our stakeholders,” said FASB technical director Hillary Salo during an American Institute of CPAs online conference Tuesday. “For example, it was brought to our attention that there continue to be issues that needed to be addressed. The board recently voted to make certain targeted improvements to the leases standard to address those issues associated with sales type leases with substantial variable lease payments and remeasurement based on a reference index and reductions of the scope of a lease contract.”

Earlier this year, FASB issued a staff Q&A document to address questions raised by stakeholders in regard to the application of the leases standard during the COVID-19 pandemic, she noted. “We issued a Q&A to address stakeholder questions on the application of the lease accounting guidance for lease concessions,” said Salo. “A lot of questions were coming up related to concessions that were being provided by lessors to lessees. The question was how do we analyze those changes to contracts? This Q&A really clarifies that an entity does not have to analyze each contract to determine whether it needs to apply the lease modification guidance as long as those concessions don’t result in a substantial increase in the rights of either the lessor or the obligations of the lessee. We also clarified that there are multiple acceptable ways to account for concessions where a deferral of payments are provided. But there are no substantive changes to the consideration of the original contract. So you can either account for that as if there were no changes to the lease contract that were made, or you can account for the different payments as variable lease payments.”

As part of its post-implementation review process, FASB has responded to over 270 technical inquiries and discussed lease implementation issues at over 13 public board meetings, she noted.

Amid coronavirus, donations set to spike on Giving Tuesday
Top Wall Street analysts are betting on these stocks heading into December
Outlining a Path for Tax Policy Compromises
Blended families already had unique financial issues — then the pandemic hit
Op-ed: How pro investors are adapting to the influx of quick-triggered, app-using market players